There seems to be good cause for celebration in the approach that has been taken in the UK to vaccination rollout. It’s not perfect and there are uneven performances across regions – but so far there is little doubt that this is one thing in the UK that can be celebrated. So far. There is a need for some caution and there is still much to learn and much to do and much to be careful of as we continue to move forward.

With such continued good progress though on the first dose covid-19 vaccine rollout in the UK and no slowdown as we moved from late January into early February, it does seem right to update the scenario projection. If only to catch up with the progress that is under the belt.

The very highest reported vaccine administration day so far (of 598k on 30th January 2021) has been higher than any we had estimated in the first release of our projection. All other days were within the realms of what we had been expecting – but the main thing was the build-up has been faster than we expected. It is clear that overall capacity can be very high when the vaccines are available at the vaccination centres – but there is not a free-flow of supply at the rate that could be accommodated. Vaccination centres have been continuing to open in recent days and weeks.

This is a remarkable achievement (as high volumes of vaccines have been available) – yet still needs to be tempered by the reality that vaccination manufacture and distribution is a fragile process.

Although these projections have been updated to reflect quicker progress to higher capacities – these are still not the most optimistic projections that could be considered. It seems wise in winter to anticipate some disruption to distribution and appointment show-ups due to poor weather (although to date these seem to have had little impact). It also seems wise to anticipate some periods when capacity will be restricted by lack of supply (we know this has happened to date, and till late spring at least could be a tension in the system).

It does still seem likely that the governments stated targets of mid-Feb for priority groups 1-4 should be achieved overall. It equally seems feasible that groups 5-9 could be administered by late March (this date is softer, and would be assisted by some increase in overall capacity also it depends on the amount of overlap between groups and the proportion of people that will take a covid-19 vaccine). [see previous blog for discussion of target]

What originally inspired the building of these projections was an intrigue about the shift in priority that will be required to administer second doses and how this may impact on the continued progress against first doses. It does seem as if there will be a dramatic shift around in priority and progress from around mid-March when in the UK, second dose administration will need to become the overriding pursuit. This must be expected to slow down the progress of first dose jabbing and may seem like a delay in the vaccination programme – but so much resource will be required to ensure the 2nd jabs are achieved that it will be an inevitable effect. That is of course unless the capacity to administer vaccines increases further and is able to be matched by increased vaccine supplies and smooth distribution – that may be too much to expect, especially as there is demand around the world for these vaccines. 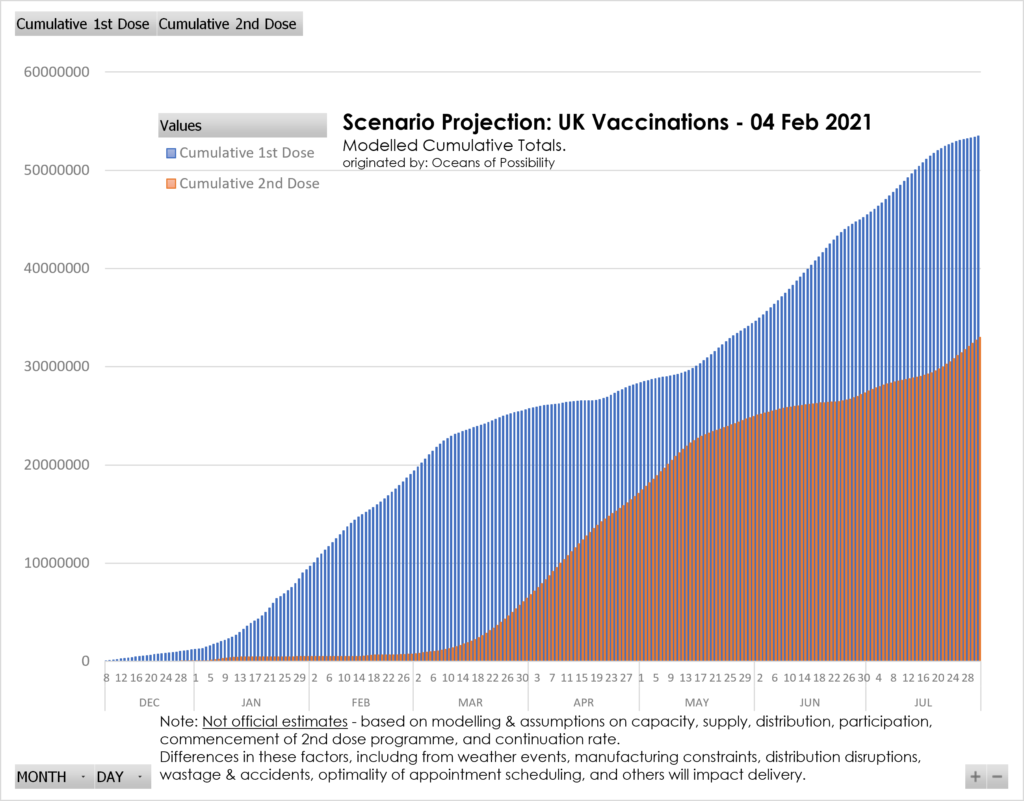 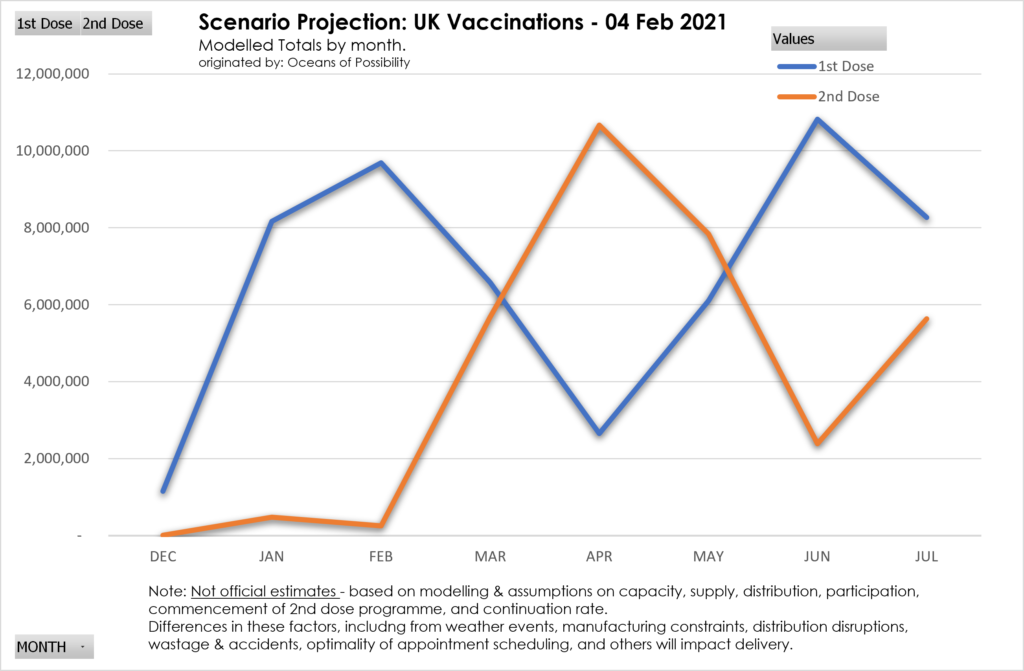 The charts above show the scenario projection for UK vaccination progress – this scenario continues till end July with the balance between first dose progress and later second dose follow through – this scenario is based on many assumptions and does not represent any official projection. It is illustrative of the picture that may emerge as progress continues -with the second dose priority taking more and more capacity in March & April, before the capacity being reverted back to prioritise further first dose rollout beyond the first phase of the UK’s 9 initially identified priority groups.

The progress has been rapid – giving some likelihood that the first 9 priority groups could be covered by first doses by the end of March if progress is able to be maintained at similar momentum. This can be impacted by many issues and so could change. This is the point at which the second doses start to require the lions share of capacity.

We do note however that early May (some 5-6 weeks later) is increasingly discussed as the target for groups 1-9 (given what we know this seems a more cautious target than the mid-Feb target originally appeared to be).

It is important to remember – especially with such dramatic progress – that the vaccines require some time to build immunity. Increasingly 3 weeks has been mentioned as the expected timeframe and therefore the ‘protected population’ is a much lower figure than the headline number vaccinated. This is especially true so early in the vaccine programme. A line has been added to one of our charts to remind that the delay is important to remember. At 4 February almost 10.5 million people had been reported as receiving the first dose of a covid-19 vaccination – but less than 3 million had received it 3 weeks prior – so on a 3 week assumption of ‘protected population’ less than a third of the headline number could be considered as such on this date. The requirement is being emphasised to observe restrictions, social distancing rules, and to follow the ‘hands – face – space’ guidance.

The chart above shows reported first and second dose vaccination numbers from the gov.uk figures. A line denoted ? protected population ? +21 days in light blue is also shown which represents this lag between receiving the first dose of a vaccination and the build up of immunity response.

Why do our Scenario Projections for Vaccine Rollout say what they say?

Scenario Projection of Vaccine Rollout in the UK